NEW PARAMEDICS TO HELP THE COMMUNITY 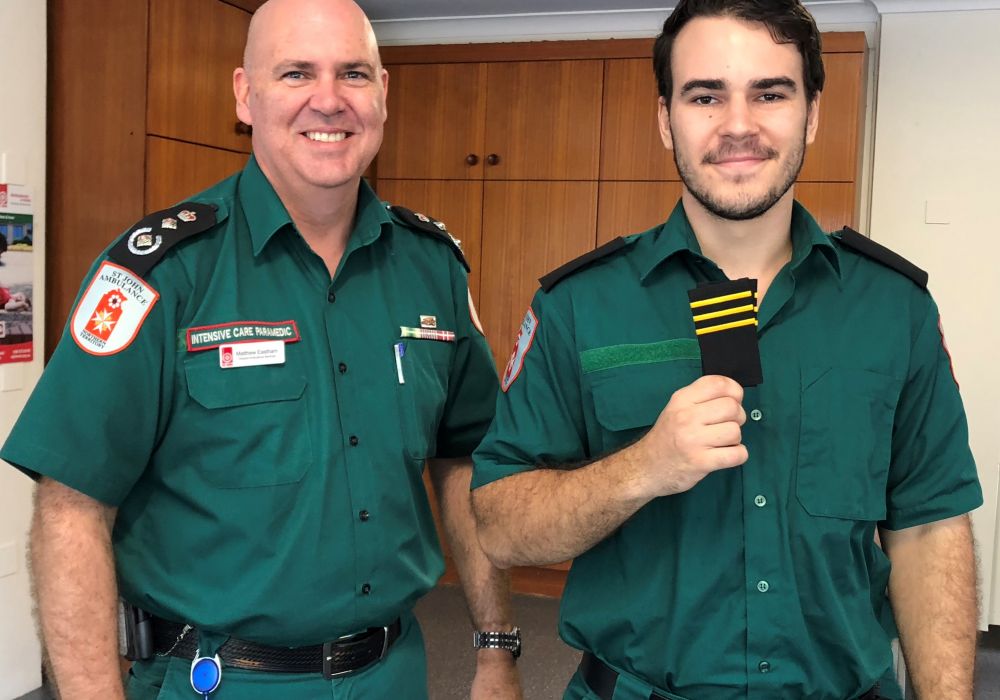 After eight weeks of intensive training, St John Ambulance NT’s newest paramedics-to-be have hit the road in their first hands-on week in their new chosen profession.

Recruited from all over Australia in a highly competitive process, this week the eight graduates spread their wings and moved to ambulance stations in Alice Springs, Tennant Creek, Katherine and Darwin, where they are now working hands-on with qualified paramedics on emergency ambulances before graduating as fully-qualified paramedics this time next year.

Katherine-born Alex Pazniewski said he was excited to get out into the community alongside paramedics in Katherine.

The son of a nurse and a police officer said he always wanted to work in the health sector, but witnessing St John paramedics in an emergency medical situation a few years ago paved his path to becoming a paramedic.

“I remember a bloke having an asthma attack and he wasn’t doing very well. I stuck around and the paramedics arrived and helped him and I really respected the job they did. That’s when I decided I wanted to become a paramedic.”

After finishing Mr Pazniewski moved to Melbourne to study paramedicine at Monash University, but he said he “always wanted to move back up to the Territory”.

“The NT is its own special place – it’s a place like nowhere else,” he said.

The 22-year-old said in the eight weeks of intensive training he and his fellow St John Ambulance Graduate Interns got to see all the different aspects of the service St John provides to the community.

“We all learned so much and got lots out of it. I love the great variety in the different aspects of the job paramedics do.”

St John NT Director of Ambulance Services, Matthew Eastham, said he was proud of the new paramedics who displayed great discipline and were eager to learn the ropes as the first group of graduates to take part in St John Ambulance NT’s newly developed internship.

“For eight weeks the graduates received an introduction into the ambulance service and the unique environment our paramedics work in,” Mr Eastham said. “The introduction also gave them the knowledge of equipment and helped with the transition to working on ambulances.”

Mr Eastham said other important parts of the initial training were a cultural awareness program in preparation to working with Indigenous people and people from different cultural backgrounds, as well as a personal safety course.

“The safety of our staff is paramount,” Mr Eastham said. “It is important that they know how to keep themselves and the crew safe. This means learning about scene awareness and understanding how to communicate and deal with people in often extremely stressful situations.”

In a small ceremony at Parap Ambulance Station the eight new graduates were presented with their new epaulettes last week, before moving to ambulance stations across the Northern Territory.

The next St John Ambulance Graduate Internship is set to commence in 2019.